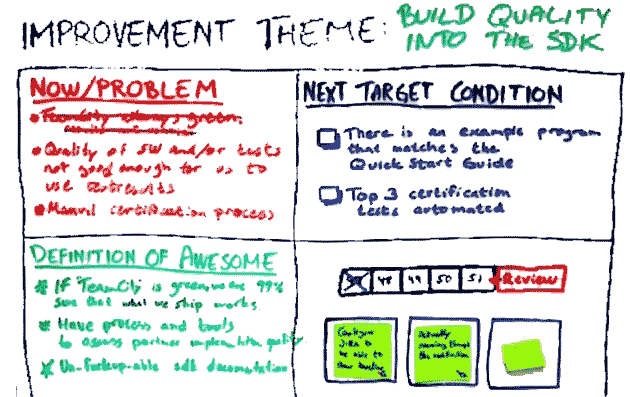 Henrik Kniberg says that Squads at Spotify are using Big Visible Improvement Boards that focus on one to three Actionable Accelerators like:

Also, the board shows a Definition of Awesome that includes things like:

END_OF_DOCUMENT_TOKEN_TO_BE_REPLACED

Stumbled across a wonderful website yesterday with a lot of awseome and open source Flash applications that produce wonderful graphics, many of them fractal, complex. [http://levitated.net/ Check out Levitated.net]—a friendly company.

The robots are able to work together as a group not by communicating with all members of the group at once, but by talking only to their neighbors, and model other similar behaviors performed by bees and ants. ‘[http://hardware.slashdot.org/article.pl?sid=07/09/17/1724253&from=rss Read more of this story] at Slashdot.

Now that the world is heating up, so are the discussions and debates on reducing resources required for computing. Reduced power, reduced heating, sleeping and suspending processors and processes.

Effective and efficient handling of our computing needs at minimal resource consumption in the complete life cycle of a network of computers has become the focus of attention. I call this ”’conscious computing”’ across the board—and my dream is to have a ”’Conscious Computing Award”’ for those solutions, projects and companies that will startle our view in this area and provide unprecedented breakthroughs in the area of smart spiritual software.

I will start tracking ideas, initiatives, programs, projects and inspirational sources on this topic. Here are the first two:
#[http://arstechnica.com/articles/paedia/cpu/power-plays.ars Power Plays: How power consumption will shape the future of computing] on how Intel is using smart self-organizing principles on chip-level to maximize the performance/power ratio in favour of green or ”’conscious computing”’.
#Sun’s Jonathan Schwartz on [http://blogs.sun.com/jonathan/entry/size_matters Switching Subjects] to drastically simplify cabling and reducing power and cooling requirements in massive data centers in their ”’Project Magnum”’ and ”'[http://www.sun.com/servers/hpc/SunConstellationPreview.jsp Constellation System]”’. Good that Sun has ”’Andy Bechtolsheim”’ back on board. Do you know that [[Andy missed his plane and changed his name]]?

Jim Highsmith on [http://feeds.feedburner.com/~r/CutterConsortiumEnterpriseSuite/~3/127107226/apm070621.html Innovation and Agility]: I have always maintained that one characteristic of a good agile leader is the ability to balance: up-front planning with on-going planning, early architecture with evolutionary architecture, and innovation with efficiency. It is a difficult balancing act. If CEOs can’t seem to get the balancing right, how can a project manager or development manager?

Harry van der Velde pointed me to Spiralized, a cool and clean introduction to Spiral Dynamics. Next, click Basics, then click on the yellow part of the spiral, only to find that network art like Toogle and—Wolfram-based—aperspectival photography and images are considered “yellow” imagery. Exciting. Makes The Nature Of Order more whole.

You’re cordially invited to attend the CHE Salon on Integral Architecture, inspired by Christopher Alexander’s The Timeless Way of Building and The Nature of Order.

May 11, Centrum Venwoude, Lage Vuursche. Free for friends of CHE.